The usage of plastic in our time is so common, the food industry, the pharmaceutical industry is using millions of tonnes, so the customers do not question its legitimacy and security. Since its commercial development in the 1950s, plastic has been a real success. Its world production follows an exponential. It reached 288 million tonnes in 2012 while in 2017 increased to 348 million metric tons, which creates an uncontrolled natural disaster for our environment. 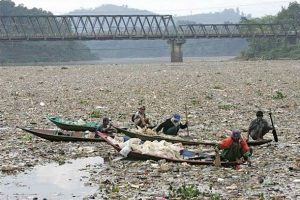 The world’s largest waste dump sites are far from our eyes, it is called the 7th continent. It is estimated that 80 to 120 tonnes of waste end up at sea every minute; a large part of this waste is plastic. At sea, under the effect of wave abrasion and solar radiation, plastic breaks up, as a final result the seventh contains is a soup of small pieces of plastic particles called micro-plastics. This plastic pollution extends over millions of square kilometers. (www.encycopedie-environnement.org)

Photo: Citarum River, flowing to the Sea, is the main source of houselhold water for Jakarta.(14million people). Photo source: photobucket

Plastics are polymers produced in the polymerization process from monomers called plasticizers. Regarding human health, many studies show that many molecules of a plasticizer remain unbound in the plastic structure. Therefore, they are released over time and penetrate the drinks and food stored in plastic packaging, and then contaminate our organisms. Despite the fact that they can penetrate through the skin or be inhaled, the contaminated drinks and food are the main way of human exposure to plasticizers. The chemical structure of plasticizers is similar to steroid hormones – the natural-control factors produced in our body. The molecules of plasticizers can either act as agonists or antagonists of steroid hormones depending on the receptor type or tissue specificity. Their negative effects are not limited only to fertility disorder. They can also interfere with other physiological processes such as brain development, bone metabolism, insulin resistance, and type 2 diabetes development. (Extract from the training of University of Torino followed by Beata).
(http://plastic-pollution.org/)

It is the variety of life on Earth, the most essential and complex feature of our planet. The term was coined in 1985 with a contraction of “biological diversity”. Biodiversity is the foundation for the ecosystem goods and services that sustains human society. It is crucial to the future of all life on the Earth, it provides food, water, and materials, as well as services like climate regulation, nutrient cycling, and protection from natural disasters.

“Without biodiversity, there is no future for humanity”
Prof David Macdonald ( Oxford University)

“The Earth is a living organism, an interconnected web of millions of life-forms.
Protecting the environment that we all rely on for our survival is an immediate way to care for all beings.”
H H Gyalwang Karmapa Ogyen Trinley Dorje

Forest biomass
Biomass is biological material derived from living organisms. It applies equally to both animal and vegetable derived material. Biomass is carbon based and is composed of a mixture of organic molecules. The carbon used to construct biomass is absorbed from the atmosphere as carbon dioxide (CO2) by plant life, using energy from the sun in the cycle of photosynthesis. Plants may subsequently be eaten by animals, thus converted into animal biomass or broken down by micro-organisms or burned.  If broken down or burned it releases the carbon back to the atmosphere in the form of carbon dioxide.

Do you know how many kilos of biomass a 100 years old oak and beech forest represent per 1 hectare?

Here is the answer, sorted by the members of the food pyramid of the forest: 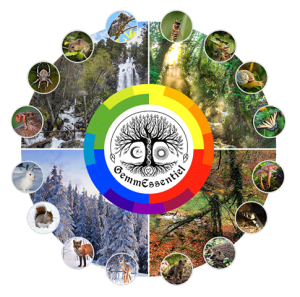 The number of animal and plant species in the beech forest, for example, gives some idea of the diversity of a forest.

(The data were taken from: HERE).

“Today, our world is experiencing serious environmental problems. Many of my friends are very concerned about this, and have concluded that the Earth will eventually become like a desert; without water, trees and rain. So we need to think about the future beings who will inherit our Earth; our children, grandchildren and everyone else. We need to consider the problems they will face, and ensure that the Earth will remain suitable for them to inhabit.”
HH the Sakya Trizin